... desiring-production is first and foremost social in nature, and tends to free itself only at the end: which is to say that Homo historia comes first. (33) 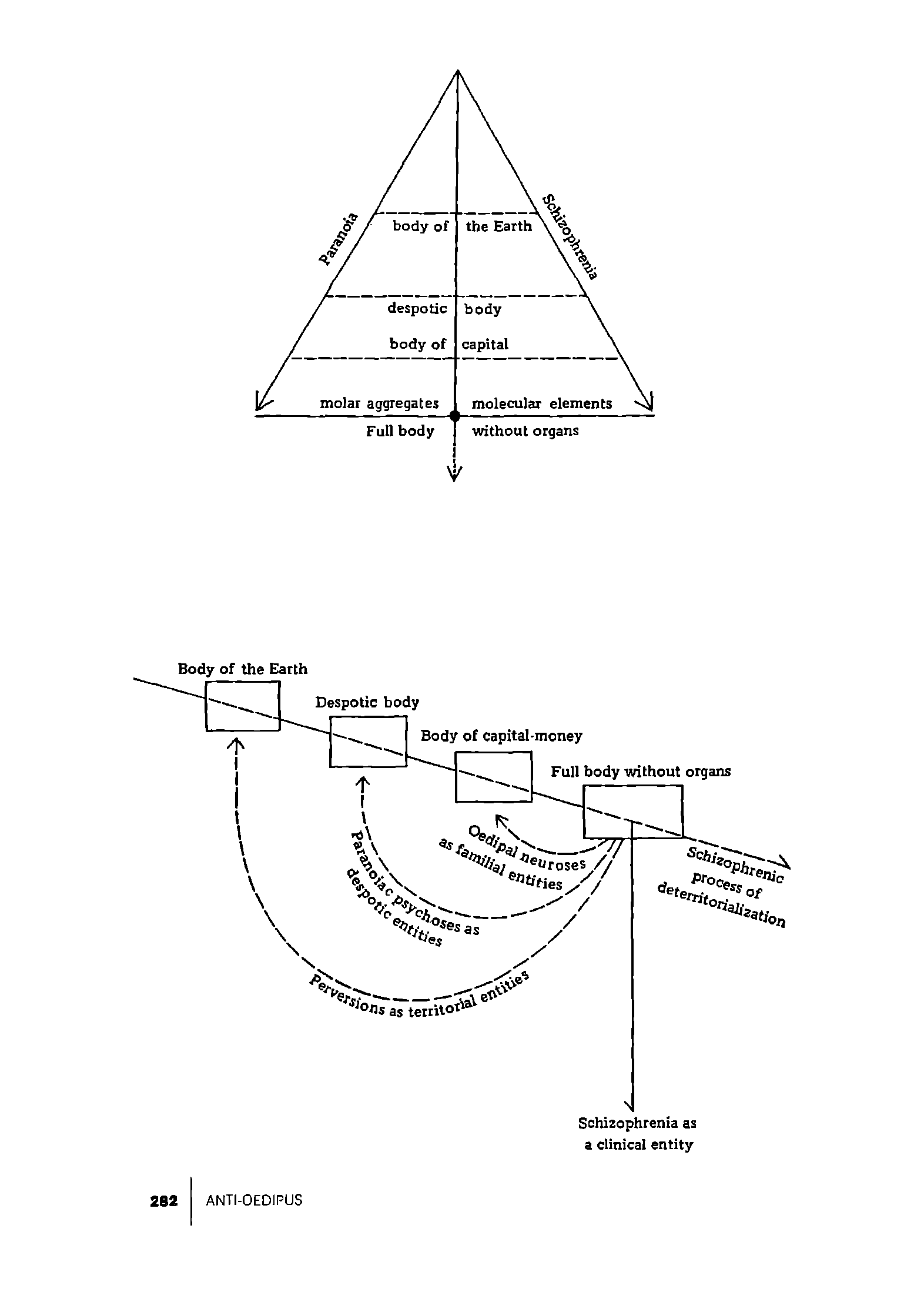 When I was learning to write in my teens, it seemed to me that paper was a prison. Four walls, right? And the ideas were constantly trying to escape. What is a parenthesis but an idea trying to escape? What is a footnote but an idea that tried — that jumped off the cliff? Because paper enforces single sequence — and there’s no room for digression — it imposes a particular kind of order in the very nature of the structure.

Subtract the unique from the multiplicity to be constituted; write at n – 1 dimensions.

n-1 理解起来很简单，字面意思无非是指把 n 里面的 unity 给拿掉。更进一步，用数学语言来说，这样实际上有 n-1 degrees of freedom because the last element is always uniquely determined by the others. 参见下面这个问题对矩阵自由度的解释：

From Molecule to Metaphor: A Neural Theory of Language

Language is inextricable from thought and experience.

Virality: Contagion Theory in the Age of Networks

These encounters with imitative repetition can therefore include a “hesitation,” an “internal opposition,” a decision point to adopt or reject the fashion.

The discourse of struggle is not opposed to the unconscious, it’s opposed to the secret. This seems a let down, but what if the secret were worth much more? A whole series of equivocations concerning what is “hidden,” “repressed,” “unspoken,” enables a cheap “psychoanalysis” of what should be the object of political struggle. The secret is perhaps more difficult to bring to light than the unconscious. The two themes which only yesterday we came across once again, that “writing is the repressed” and that “writing is by rights subversive,” in my opinion betray several operations which must be severely criticized.

Perhaps it has to do with investments, as much economic as unconscious: there exist investments of desire which explain that one can if necessary desire not against one’s interest, since interest always follows and appears wherever desire places it, but desire in a way that is deeper and more diffuse than one’s interest.

By engaging in this struggle which is their own (they are perfectly familiar with its targets, and they themselves determine the methods), these people enter the revolutionary process – as allies of the proletariat, of course, since power is exercised in the way that maintains capitalist exploitation. These people truly serve the cause of the proletariat revolution by fighting precisely at that point where they suffer oppression.

Praxis is a network of relays from one theoretical point to another, and theory relays one praxis to another. A theory cannot be developed without encountering a wall, and a praxis is needed to break through. Take yourself, for example, you begin by theoretically analyzing a milieu of imprisonment like the psychiatric asylum of nineteenth-century capitalist society. Then you discover how necessary it is precisely for those who are imprisoned to speak on their own behalf, for them to become a relay (or perhaps you were already a relay for them), but these people are prisoners, they’re in prison. This was the logic behind your creating the GIP (Group for Information on Prisons): to promote the conditions in which the prisoners themselves could speak. It would be totally misguided to say, as the Maoist seemed to be saying, that you were making a move toward praxis by applying your theories. In your case we find neither an application, nor a reform program, nor an investigation in the traditional sense. It is something else entirely: a system of relays in an assemblage, in a multiplicity of bits and pieces both theoretical and practical. For us, the intellectual and theorist have ceased to be a subject, a consciousness, that represents or is representative. And those involved in political struggle have ceased to be represented, whether by a party or a union that would in turn claim for itself the right to be their conscience. Who speaks and who acts? It’s always a multiplicity, even in the person that speaks or acts. We are all groupuscles. There is no more representation. There is only action, the action of theory, the action of praxis, in the relations of relays and networks.

So it is that theory does not express, translate, or apply a praxis; it is a praxis – but local and regional, as you say: non-totalizing. A struggle against power, a struggle to bring power to light and open it up wherever it is most invisible and insidious. Not a struggle for some ”insight” or ”realization” (for a long time now consciousness as knowledge has been acquired by the masses, and consciousness as subjectivity has been taken, occupied by the bourgeoisie) – but a struggle to undermine and take power side by side with those who are fighting, and not off to the side trying to enlighten them. A ”theory” is the regional system of this struggle.

As soon as a theory takes hold at this or that point, it runs up against the impossibility of having the least practical consequence without there being an explosion, at some distant point if necessary. That’s why the idea of reform is so stupid and hypocritical.